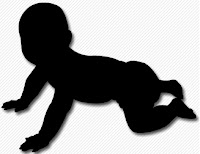 Gracie Rose was born around the time that the City of Greater Geelong assured Ryan Court residents and DCSCA that a council-built 'urban dam' in their street would be filled-in and the area restored. Gracie Rose is celebrating her second month’s birthday, but the 'urban dam' remains untouched.

Since March, Ryan Court residents have watched as this urban dam filled with rainwater that fails to drain away as promised, and that has collected foam and oil slicks. In July, they asked DCSCA for assistance and, as a result, council officers told them that the dam would be filled-in. Indeed, council officers have said on several occasions that the dam would be filled in, each assurance accompanied by a date for the completion of the work that is later than the previous one. To create the dam took just two days, but to 'un-create' it has taken three months so far, with no end in sight.

Gracie Rose's grandmother is a Ryan Court resident. She keeps telling Gracie Rose about council officers' repeated assurances, but as Gracie Rose grows up, she's learning not to believe everything she hears! Happy birthday, Gracie Rose; see you again next month.
Posted by Patrick Hughes at 5:49 PM