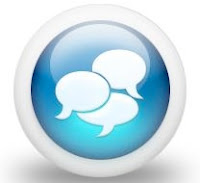 DCSCA President Doug Carson then thanked everyone for attending the meeting and invited them to sample the refreshments. As they did so, people looked at displays by the Bellarine Historical Society, the local Harvest Basket Group, the Portarlington Lions and the Festival of Glass. They also looked at DCSCA Committee member Neil McGuinness's display of photographs of the new signage at The Dell; and his extensive display showing the network of walking/cycling tracks that DCSCA is proposing in its Open Spaces Network program.
Posted by Patrick Hughes at 4:30 PM No comments:

The meeting - arranged some months ago - was at the Gheringhap Street office of David Koch (MLC). ABCA had asked to talk to Minister Guy about the proposal in the Liberal/National Coalition's election manifesto to create a series of 'Planning Statements', including one for the Bellarine Peninsula. In particular, ABCA wanted to know whether the creation of the Bellarine 'Planning Statement' would feature input from local communities and the Minister confirmed that there would be.

The ABCA representatives then explained the ABCA's particular significance as the only democratically elected and accountable body representing all the communities on the Bellarine. They highlighted the lack of such democratic accountability in other local 'community groups' and emphasised the positive role that ABCA could play as a conduit (alongside City of Greater Geelong Councillors) for the exchange of information and ideas between the state government and local people.

The Minister thanked the ABCA representatives for their time and for their views. He said that his office would be in touch at the time when the Planning Statement for the Bellarine Peninsula was being written, but he didn't know just when that would be.
Posted by Patrick Hughes at 4:08 PM No comments:

The recently released plans for the new Central Walk housing estate in Drysdale show that the estate will contradict several elements of the Structure Plan for Drysdale & Clifton Springs produced by the City of Greater Geelong (CoGG).

The land on which the estate will be built is bounded by Murradoc Road, Princess Street, Woodville Street and Clarendon Road. In the CoGG Structure Plan, this land is earmarked for high density housing and to that extent, building the estate is consistent with the Structure Plan. However, the Structure Plan states on several occasions that its intention is to retain the towns' traditional, rural character and to ensure a mix of accommodation. The plans for Central Walk show that it will meet neither of these intentions.

Central Walk developers Urban Land Developments claim that, 'Open space and greenery will feature prominently at Central walk and residents will enjoy the spoils (sic) of an extensive linear park, wetlands and central reserve ...' However, the plans show that the 'central reserve' is about the size of the neighbouring Aldi site; and while the 'extensive linear park, wetlands' is a welcome inclusion, it is just another way to describe the water course that flows through the land already and couldn't be built on anyway. Also, the plans suggest strongly that while Central Walk will be home to families, it will include no housing suitable for single people - elderly and young - who once again miss out on the chance to live independently in their community.

Further, CoGG has approved this 200-lot development while doing nothing to ensure that there are jobs available for the people who will live in it. This isn't the fault of Urban Land Developments - it's another instance of the council's lack of vision, which is turning our towns into 'dormitories' for Geelong and Melbourne. DCSCA believes that CoGG should be planning the economic development of our towns just as it is planning their physical and social development.

Finally, the lack of adequate public transport is forcing increasing numbers of people to drive cars to work, increasing the pressure on already crowded roads and, of course, increasing the emission of harmful greenhouse gases.

When the proposals for the estate were published last year, local residents had serious concerns about them. DCSCA's formal submission to the council highlighted the contradictions between the proposals and the Structure Plan. (We also criticised the council's poor public consultation on the issue.) Subsequently, we presented our arguments to a Planning Panel appointed by the state Planning Minister. The Panel recommended that the council approve the proposal, which it did.

CoGG has encouraged local people to participate in creating Structure Plans for their towns and tells them that these Plans will guide their area's development. However, the grand aspirations in these Structure Plans count for nothing as CoGG gives developers permission to cover the Peninsula with homogeneous housing estates, while ignoring the needs of single people and forcing increasing numbers of people to commute.
Posted by Patrick Hughes at 12:47 PM No comments: