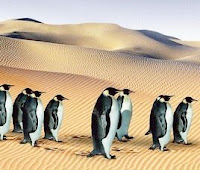 The occasion was a public meeting about climate change, held at SpringDale Neighourhood Centre on Friday 21 October. The meeting was organised by members of the Drysdale Harvest Basket Group and supported by the Drysdale & Clifton Springs Community Association (DCSCA) and the Drysdale Raw Foods Group.

Presenter Damien Paull from The Climate Project said that the updated slide show was released in September. Like the original show, the new version uses startling graphics and clear graphs to show that climate change is real and that unless humanity takes it seriously, we will see increasing incidence of droughts, floods, storms and storm surges - all contributing to a significant decline in the human population's ability to feed itself.

The updated slide show includes new material to counter climate change deniers. The deniers either say that climate change is happening at all or, if they accept that it's happening, they deny that it's caused by human activity. Paull highlighted new evidence from 'core sampling' of the ice caps at the north and south poles that shows irrefutably that the earth has been warming - erratically but inexorably - since the start of the industrial evolution; and that the pace of global warming is accelerating. Paull also contrasted the dissidents' denials with the definite action being taken by the global insurance industry. Nationally and internationally, insurance companies are refusing to cover properties that they consider at risk from climate-induced disasters (floods, fires, etc.). At the local level, the City of Greater Geelong is among the growing number of local councils withholding planning permission from developments in areas regarded as susceptible to rising sea levels.

The Climate Project was founded in November 2006 as a non-profit organisation. It consists of 3,600 volunteers around the world trained by former USA Vice President and Nobel Laureate Al Gore to alert people to the harmful effects of climate change. Worldwide, presenters from The Climate Project have spoken to more than 7.3 million people about the need to maintain the climate balance on which human life and society depend.

Illustration taken from the poster for the movie 'An Inconvenient Truth'.
Posted by Patrick Hughes at 1:07 PM