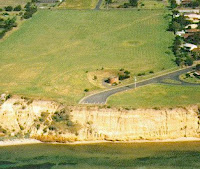 People in Drysdale & Clifton Springs are concerned that the City of Greater Geelong's Masterplan for the Beacon Point Reserve in Clifton Springs would 'develop' this vital green open space with facilities such as barbeques, buildings and pathways.

Over fifty people discussed the future of Beacon Point at a public meeting on October 5 at Drysdale's SpringDale Neighbourhood Centre. The Drysdale & Clifton Springs Community Association (DCSCA) had called the meeting to gauge local people's views on the City of Greater Geelong's Belarine Strategic Plan, now halfway through its ten-year life.

The Reserve at Beacon Point was one of several items in the Strategic Plan with direct effects on Drysdale & Clifton Springs. Several speakers argued that the less done to Beacon Point the better because such facilities can, unless maintained well, fall into disrepair and become prey to vandalism. One speaker earned applause for suggesting a collective letter to the City of Greater Geelong that said 'Beacon Point - just leave it alone!'

Beacon Point is one of the sites in DCSCA's Open Spaces Network - a collection of open spaces protected from 'development', interconnected by walking and/or cycling tracks. DCSCA President explained that each site in the Open Spaces Network has its own group of 'Friends' and asked if anyone would like to be part of a Friends of Beacon Point. Fifteen people volunteered on the night and others have volunteered since. Doug Carson said that, 'The number of people volunteering for the Friends of Beacon Point shows clearly that local people are vitally interest in their towns and want the council to listen to them before it creates still further change in our community.'

Beacon Point was a focal point of a broader concern at the loss of open space and the continual erosion of the 'green belts' between the towns on the Bellarine Peninsula and there were calls for a 'no build' zone to surround each town. The one change that people want at Beacon Point was better access to the beach and a say in just where and how that access is constructed. Community Association President Doug Carson said, 'The current beach access built off the end of Cantata Way is almost unusable, and was built without any community involvement or discussion. Indeed, had the community had its say, the Cantata way access would never have been built there.'
Posted by Patrick Hughes at 3:41 PM