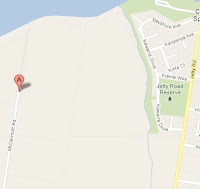 Organisers of the campaign against the 'no limits' bridge proposed for Bayshore Avenue in Clifton Springs are highlighting two positive alternatives to the bridge.

The Clifton Springs Independent Ratepayers Group (CSIRG) remains implacably opposed to the proposed bridge, which will be built to enable heavy construction vehicles to access land owned by property developers Bisinella at the northern end of the Jetty Road Growth Area. CSIRG is being supported and assisted in its campaign by the Drysdale & Clifton Springs Community Association (DCSCA).

CSIRG are arguing that such a bridge is not only completely inappropriate in such a local, minor road, but also that heavy construction vehicles could access the land in question via two alternative routes. Each alternative would be more beneficial for the development of the Growth Area as a whole than the 'no limits' bridge being proposed by Bisinella and the City of Greater Geelong (CoGG).

The first alternative would be a major road running the whole length of the Jetty Road Growth Area, instead of stopping half-way, as it does at present. This would mean that all the developments in the Growth Area would be served by a road designed to carry heavy traffic, instead of the couple that have such a road so far. Why does the only major road in the whole Growth Area stop halfway through it? It appears that CoGG planners suddenly realised that they'd not specified a road into the northern end, panicked and designated the Bayshore Avenue bridge as the access to that land.

The second alternative would be a road into the west side of the Growth Area from McDermott Road. CoGG officers 'understand' that ‘rights of carriage’ exist over the land, so there should be no major legal issues involved. Such a road would run between the Growth Area and McDermott Road which, in tern, leads into Coryule Road.

CSIRG has invited Planning Minister Matthew Guy and local MPs David Koch and Lisa Neville to visit Bayshore Avenue and allow CSIRG representatives to show them the advantages of each of the two alternatives.

Meanwhile, the proposal for a 'no limits' bridge in Bayshore Avenue will be heard by the Victorian Civil and Administrative Tribunal (VCAT) on 26-27 October in Geelong Magistrate's Court. CSIRG and DCSCA are urging members and friends to come and support your neighbours!
Posted by Patrick Hughes at 4:13 PM