Climate change - what could it mean for the Bellarine? 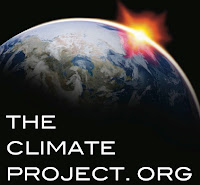 People on the Bellarine have the chance to see an updated version of 'An Inconvenient Truth', by former USA Vice President and Nobel Laureate Al Gore.

The latest version of the Academy Award-winning documentary will feature in a public meeting about climate change on Friday 21 October at 7.30 at SpringDale Neighbourhood Centre. Presenter Damian Paull of The Climate Project will talk about the effects of the documentary and highlight its implications for the Bellarine Peninsula.

'I think that a broad cross section of the community is concerned with climate change, as shown by the recent rallies supporting the idea of a price on carbon', said Paull. 'Increasingly, mainstream Australia is concerned about the effects of climate change; and economic debates have to address climate change - especially the question of who is going to pay for it now.'

Damian Paull is CEO of the Code Compliance Monitoring Committee, which ensures that banks meet criteria of good banking practice. The Climate Project was founded in November 2006 as a non-profit organisation. It consists of 3,600 volunteers around the world trained by former USA Vice President and Nobel Laureate Al Gore to alert people to the harmful effects of climate change. Worldwide, presenters from The Climate Project have spoken to more than 7.3 million people about the need to maintain the climate balance on which human life and society depend.

The meeting is being supported by Drysdale Harvest Basket Group, the Drysdale & Clifton Springs Community Association (DCSCA) and the Drysdale Raw Foods Group.