Hopping on and off in Collins Street

Residents of Collins Street, Drysdale can now hop on and off the Route 79 bus, because DCSCA has helped to get their bus stop upgraded.

In mid-September, Collins Street residents asked DCSCA for help. Elderly and infirm people were finding it extremely difficult or impossible to get on/off the Route 79 (Portarlington-Geelong) bus, especially if they had walkers and/or bags with them, because the bus stop outside Christian College in Collins Street, Drysdale had very poor road surface and no proper gutter. Even a bus’s raising/lowering platform wasn’t enough to compensate for the condition of the road at this bus stop. The next bus stop (where the road surface is more satisfactory) is too long a walk away for elderly and infirm people, so effectively, these people were denied access to a public transport service that is meant to be available to everyone. 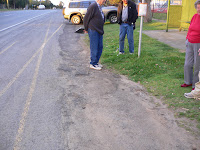 DCSCA phoned the state Department of Transport in late September, then e-mailed the Department photographs of the bus stop in early October. After a follow-up e-mail in late October, the Department said that it had raised the issue at a recent meeting with the City of Greater Geelong and that it would 'put in a bid for funding'. (Right: the original bus stop.)

Subsequently, an upgraded bus stop appeared in Collins Street like a mushroom overnight! Reports from locals describe it as, ‘very impressive’ and ‘a bus stop up graded to the highest standard of our expectations ... (with) ... a proper kerb and channel, a generous slab of concrete for pavement, and (a) repaired the road surface. On the village side there is now a fixed seat.’ Thanks have been expressed to all concerned, especially the state Department of Transport.

What a pleasure to report a positive outcome!
Posted by Patrick Hughes at 6:32 PM