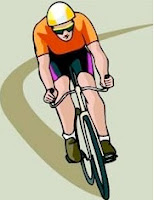 Pedestrians and cyclists can expect much safer travel on Jetty Road when the current construction work is complete in early 2012.

DCSCA's Neil McGuiness reports that DCSCA has pressed the City of Greater Geelong to make Jetty Road safer and, in particular, to improve the cycle track between Wyndham street and Griggs Creek. So we were pleased to hear that as part of the current construction work on Jetty Road, a 2.5m concrete path will be created on the road's western side. The two-way path will run from a point 170m south of Coriyule Road to a point 120m north of Griggs Creek and will be shared by pedestrians and cyclists. It will be separated from the road by 1.25m.

These improvements to Jetty Road take us a step closer to DCSCA's vision of an Open Spaces Network - a collection of open spaces protected from development and linked by a network of cycling/walking trails. We have three suggested trails:
On each trail, we'd like to see signs and leaflets directing cyclists and walkers to scenic locations, popular destinations and places of interest. Jetty Road has been a sticking point for the Northern Trail, so the improvements will take us a step closer to our vision of a network of safe cycling/walking trails in our community.
Posted by Patrick Hughes at 3:39 PM