Festival of Glass an attractive investment The Bendigo Bank has shown its confidence in the 2012 Festival of Glass by investing $2,500 in sponsorship. The money will help to pay for the costs of the Festival's infrastructure, marketing and promotion.

The Bendigo Bank’s sponsorship of the 2012 Festival builds on its support and encouragement for the inaugural Festival of Glass in 2011 and shows potential sponsors that this innovative event is gaining a positive reputation from which they can benefit.

The Bank's support follows an announcement by City of Greater Geelong Mayor Cr. John Mitchell that the City will invest $6,000 in the 2012 Festival of Glass, which he described as 'an innovative festival (that) is already stirring considerable interest among glassmakers and fans around Australia.'

'Ticks of approval' from these two major local funders reaffirm the vision behind the Festival and give a tremendous boost to the artists, craftspeople and business participating in it. They also show potential sponsors that the Festival of Glass has a growing positive reputation from which they can benefit.

Exhibitors investing Exhibitors at the 2012 Festival of Glass are also investing in its success. Mor 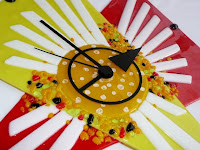 e than forty exhibitors - many of them local - have booked spaces already, three months before the Festival; and eighteen of them have donated items worth a total of $1,520 to the 2012 Festival of Glass raffle.

Doug Carson, Chairperson of the Festival Committee said, 'The Festival Committee has been (almost!) overwhelmed by the response and we really appreciate it. The number and value of items donated is a strong vote of confidence by local glass artists and craftspeople in the Festival’s potential to promote their work. It’s also clear evidence that the Festival has the potential to become a major showcase of local glass art, craft and industry, driven by the active support of local glass workers. The more that the Festival generates broad and active support such as this, the more viable it becomes. So a big "Thank you" to those exhibitors who have donated items.'
(Illustration: VA Glass)
Posted by Patrick Hughes at 4:34 PM