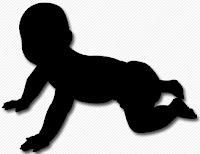 Gracie Rose is looking forward to a celebration that combines her birthday with the long overdue filling-in of a dangerous 'urban dam' in Ryan Court, Drysdale!

Gracie Rose was born in July - around the time that the City of Greater Geelong assured Ryan Court residents and DCSCA that a council-built 'urban dam' in their street would be filled-in and the area restored. Since March, Ryan Court residents had watched as this urban dam filled with rainwater that failed to drain away as promised, and that soon collected foam and oil slicks. In July, they asked DCSCA for assistance and, as a result, council officers told them that the dam would be filled-in.

Now, the Ryan Court 'urban dam' is being filled-in - four months after it was promised. Plans are afoot for a celebration that combines Gracie Rose's four-month birthday with the dam's disappearance. An invitation probably won't be sent to the council contractor who said recently that they couldn't fill-in the dam because it was too wet!
Posted by Patrick Hughes at 1:34 PM