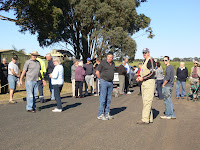 The City of Greater Geelong's (CoGG) decision to allow an 'unlimited load' bridge to be built from Bayshore Avenue into the northern end of the Jetty Road Urban Growth Area is attracting growing opposition and media interest.

Residents argue that an 'unlimited load' bridge would take a heavy toll on their way of life, on their safety and on their fragile natural environment and cultural heritage. A decision of this sort of significance would normally be subject to public scrutiny through the formal planning process, but local people heard about this 'rogue bridge' only once the council had decided to allow it. 864 residents have signed a petition to state Planning Minister Matthew Guy, calling on him to intervene in the issue.

What next?
Clearly, this issue won't go away. The only thing in doubt is just when the council will sit down with local people, hear their concerns about the rogue bridge and say what it will do to allay their fears. Until that time, local opposition and media interest both look set to increase.

(Illustration - local residents gather at the site of the proposed bridge over Griggs Creek.)

Posted by Patrick Hughes at 4:18 PM