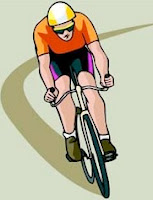 DCSCA's Neil McGuinness explained that the Northern Cycling Trail is part of DCSCAs Open Spaces Network program, which aims to create a network of open spaces in Drysdale and Clifton Springs, each with its own 'Friends' group and all connected by connected by a network of cycling/walking trails. (See 'Don't fence me in!' on this blog November 26 2010)

Neil also explained that DCSCA is taking its proposals to the Affiliation of Bellarine Community Associations (ABCA), which represents all nine communities on the Bellarine, with the ultimate aim of creating a Bellarine-wide integrated network of cycling/walking trails, with each town having its own 'loops', such as Drysdale's Northern Cycling Trail.

CoGG's Sports and Recreation department has allocated limited funds to cycling issues, so officers try to 'leverage' their limited funds. For example:
o Sports and Recreation sometimes pays all the costs of creating a bike lane and sometimes shares the costs with CoGG's Engineering Services department (which physically creates the bike lanes)
o Sports and Recreation is paying for the 'green treatments' (currently marking-out bike lanes in especially hazardous places in Central Geelong) as 'demonstration projects' and asking Engineering Services to create more at equivalent locations across Geelong
o Some projects - while part of CoGG's Cycle Strategy - are on roads owned by VicRoads, so CoGG looks to VicRoads to implement them.

CoGG's Cycle Strategy lists projects according to where they sit in five priority bands. DCSCA officers noted that of the twenty projects in the top priority band, fourteen are in Central Geelong, while the remaining six are spread across all of Geelong's outer areas (such as Drysdale & Clifton Springs!). Jake McMinn explained that this is because many Central Geelong projects create longer bike lanes/trails by linking two or more separate ones.

Thus, cycling - like economic development and tourism - is another instance of disparity between the resources allocated to Central Geelong and those allocated to 'outlying' areas, enriching the centre at the expense of the periphery. Having said that, one of the six top priority cycling projects in 'outlying' areas is to create bike lanes in Drysdale's Jetty Road, so that's comforting.

'All aboard the hamster wheel!' 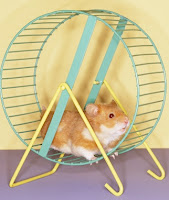 It was a good meeting and DCSCA officers felt that the Northern Cycle trail at least has a foot on the hamster wheel of CoGG's policy-making! Jake McMinn will investigate whether plans for the proposed Drysdale bypass include bike lanes and let us know. Meanwhile DCSCA will re-work its current proposal for a Northern Cycling Trail as a series of elements, rank each one according to its priority and submit the result to CoGG.
Posted by Patrick Hughes at 5:49 PM