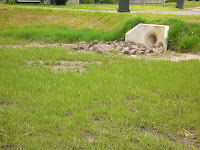 DCSCA members and friends in Ryan Court, Drysdale, have been assured by the City of Greater Geelong that it will fill-in a two feet deep unfenced hole that it excavated at the bottom of their road.

CoGG created this 'Bio-retention Basin' to filter impurities from storm water running down the sloping street from a nearby housing estate. As rainwater filled what is effectively an urban dam and oil slicks and detergent foam covered its surface, Ryan Court residents sought DCSCA's help to convince the council to fill-in this folly and restore the area.

Council officers told the residents that the council had sent them a letter in 2010, telling them that the dam would be created. No-one received such a letter. Had they been asked, residents could have pointed out that young children live near the dam, which is in the middle of a well-used local shortcut across a creek.

Council officers have now told residents that the council will fill-in the hole and restore the area, but won't say when. They have told DCSCA that they have asked 'engineering consultants' to prepare a 'plan' for the work, on which residents will be invited to comment. The work will start at some subsequent indeterminate date. (The work presumably entails blocking the pipe feeding the dam, filling-in the hole and replanting the surface.)

The continuing flooding of this ‘urban dam’ poses a continuing hazard to local people. DCSCA has asked council officers what steps they will take to combat this hazard until the work is completed. We await their response.

Posted by Patrick Hughes at 1:24 PM