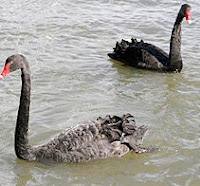 Work on Stage One of the long-awaited footpath around Lake Lorne in Drysdale is scheduled to start in July and last for about six weeks.

On Friday 8 June, representatives of DCSCA and the Drysdale Pony Club joined City of Greater Geelong (CoGG) officers and consultants to mark out the final route of Stage One of the footpath, which will stretch from the Pony Club jumps off Reserve Road round the lake's western side to a point just before the Bellarine rail line. Stage Two will continue the footpath past the rail station and will include a boardwalk looking eastwards towards the islands in the lake; and Stage Three will complete the circuit on the Lake's eastern side. The council has yet to allocate money for Stages Two and Three.

CoGG will inform residents with properties near the Lake about the work before it starts; and on the route of Stage One it will post a plan of the area showing the route of the whole path, so that everyone can seen just what's happening. These actions will continue the council's excellent record of consultation around this project, driven by the particular officer in charge. On many occasions, DCSCA has criticised the council's consultation process and has cited the Lake Lorne consultations as an example of just how easy - and effective - it can be to involve local people meaningfully in council decisions.
Posted by Patrick Hughes at 12:35 PM