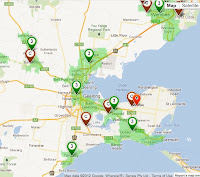 Pleasing some of the people some of the time
Of course, the staged introduction of any service never pleases everyone. It pleases the people in the early stages and displeases everyone else. However, a longer wait for a service is more acceptable if it can be seen as the result of a fair and rational process. The NBN’s roll-out map shows that the introduction of broadband in the Geelong area is neither fair nor rational. It’s unfair on communities outside of central Geelong whose local economies may suffer as businesses in the centre become more competitive; and its scattergun approach of connecting individual communities in isolation from neighbouring ones is anything but rational.
Posted by Patrick Hughes at 1:22 PM