Consult the locals? We don't have to! 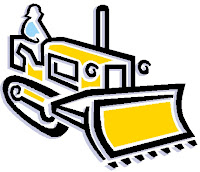 Residents of Wyndham Street, Drysdale, were given a rude awakening this morning by chain saws and mulchers. Contractors were destroying trees on the corner of Wyndham Street and Jetty Road, as part of the work to enlarge the junction.

Local people have had no chance to comment on the work, because the council hasn’t published the plans. Those secret plans have already led contractors to divert Griggs Creek through a culvert under Wyndham Street, trapping fish, which then died and rotted. Local people could have told the council and its contractors that this would happen, but they were never consulted.

The TGM Group are consultant engineers managing the works, under the supervision of the City of Greater Geelong's engineering department. Nonetheless, neither the council nor TGM knew that the trees were being destroyed until residents contacted them this morning. Further, council engineers had reassured residents earlier that the trees' future had not been decided.

Three trees have been destroyed so far and the contractors have two more mature eucalypts in their sights. After talking with residents this morning, TGM has agreed to residents' suggestion that they call a meeting of local residents, explain what’s happening to their area and ask for their views. TGM has halted the tree clearance until that meeting, which will probably happen on Friday or perhaps next Monday.

Secret plans undermine democracy and citizenship
The failure to consult residents about the destruction of their trees is part of a much bigger failure of consultation across the whole project. The Wyndham Street/Jetty Road junction is being expanded significantly to accommodate the traffic coming out of the new housing estate on Jetty Road and is to have traffic lights in it. Wyndham Street will have three lanes of traffic instead of two, to match the three-lane road leading into and out of the Jetty Road estate.

Local residents have never been consulted about the expansion and the plans have been kept secret. When asked about this policy, council officers have said that they didn't publish the plans 'because we didn't need to'. Once again, that may be true in the strict legal sense, but if the council had any regard for democracy and the role of citizens in decisions affecting thir lives, they'd make an effort to involve us.
Posted by Patrick Hughes at 4:05 PM