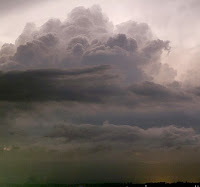 The 'listening post' was open between 12.00 a.m. and 2.00 p.m. opposite the side entrance to the Safeway complex. Despite the thunderstorms, lots of people dropped in to say how they want the region to develop. The listening post's two G21 staff did say, however, that it was sometimes hard to hear people over the drumming of the rain on the roof!

Drysdale's listening post was one of thirty held during November and December by the G21 organisation, which is a formal alliance of governments, businesses and communities across five councils - Greater Geelong, Colac-Otway, Surf Coast, Golden Plains and Queenscliff. The listening posts are part of broader consultations to shape a draft G21 Regional Growth Plan, which will be released for public comment in April 2012.

Regional Growth - 3 options
The Growth Plan is intended to manage the pressures on land-use, environment, employment, infrastructure and services accompanying population growth in the G21 region, which is expected to grow from the current 290,000 to around 500,000 by 2050. The current G21 consultations invite people to comment on three possible options for the region's growth:
1. 'Growing in' would consolidate and build on existing towns and villages, creating denser population centres. Less natural and agricultural land would be 'developed', enabling the region to retain and highlight its natural features.

3. 'Growing out' would create new towns and communities in 'greenfield' sites (natural and agricultural land) along existing major transport routes.

The G21 staff at Drysdale's listening post said that most of their visitors had preferred either the 'Growing in' or 'Shared growth' options, or some combination of the two. Local people were concerned that the 'Growing in' option could lead to higher-rise buildings in inappropriate locations, including small country towns like Drysdale & Clifton Springs. They were very concerned that the 'Growing out' option would mean wall-to-wall buildings that would rob the region (and especially the Belarine Peninsula) of its unique characteristics.

DCSCA's response to the options
DCSCA is a local community association and so our focus is generally on the issues that matter to people in our local community. However, many of those 'local' issues are 'regional' ones, too and so our views on local issues can often be generalised into views on regional ones, as follows:
1. Integrated growth would link population growth with planned growth in local economies and transport, preventing regional towns and communities becoming mere 'dormitories' for central Geelong or Melbourne.
2. Sustainable growth would improve the quality and reach of public transport (including, perhaps, a Bellarine light rail system), reducing traffic congestion and pollution significantly
3. Democratic growth would actively encourage the growth and strength of local citizenship by encouraging local communities to participate in the design and enactment of growth plans AND giving them the resources (time, space, money and access to expertise) with which to do so, rather than relying exclusively on the good will of 'the usual suspects'.