A new future for central Drysdale?

Day one of the workshop started with an invitation to participants to identify what they thought were the good and bad features of the current town centre, especially in light of the town's increasing population. In the next session, participants suggested features of the town centre that needed to change - and those that should remain. People raised a variety of issues, including traffic congestion, pedestrian safety, the 'look and feel' of the town centre, poor public transport and the need to offer the expanding population a variety of jobs, rather than rely solely on shops and tourism. On day two, the consultants spent the morning collating all the material from day one's discussions into a presentation to the participants, which ran from 3.30-5.00 p.m.

Some new ideas
The consultants' presentation created great interest. It contained several radical proposals, including creating a permanent shelter for a farmers' market in the space between the side entrance of the Safeways complex and the rank of shops opposite; making the roundabout in front of the Drysdale Hotel pedestrian-controlled and diffusing traffic away from it by creating new linking roads (e.g. between Collins Street and Murradoc Road); ensuring that new buildings faced their streets, rather than back onto them; and making any expansion of Safeways contingent on the development of a 'civic centre' facing the green and rotunda. There were also proposals to make Murradoc Road more attractive, e.g. by creating a service road in front of the current light industrial units, landscaping both sides of the road, installing proper footpaths and encouraging 'al fresco' dining near to the Aldi site. 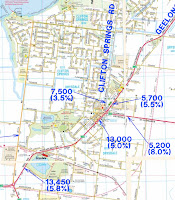 ... and the bypass??
The council had asked the consultants to create a draft 'Masterplan' for the town centre, thereby excluding any considertion of the proposed Drysdale bypass. However, local people at the workshop insisted that any discussion about the town centre should include the issue of the bypass.

A Drysdale bypass would address many of the town's current problems, including traffic congestion and pedestrian safety. The need for a bypass has been increased significantly by the closure of the rubbish tip at Corio, sending still more heavy trucks carrying rubbish from the rest of Geelong through the town to the Drysdale tip. Also, a bypass at Murradoc Road's eastern end would offer very good transport links to Geelong, increasing the likelyhood that new businesses would want to establish themselves in Murradoc Road.

What next?
The consultants will collate their presentation and participants' responses into a detailed report, which they will submit to the City of Greater Geelong by the end of this year. In early 2012, the council will publish the report and its response to it as a draft 'Masterplan' for Drysdale town centre, on which it will invite comments from the community. After that public consultation, the council will publish a final 'Masterplan' for the town centre, which it will then seek to have included in the Greater Geelong Planning Scheme.

While the workshop was a success in its own terms, it was organised in a way made it almost impossible for certain types of people to attend:
People at work could only attend if they could afford to take take one or two days off work AND get permission to do so. This might not be a problem for middle class professionals, but it certainly would be for anyone else at work. Local business owners faced the same problem, of course.
Parents of young children couldn't easily set aside two days for a workshop and, even if they could, there were no child care arrangements in place to enable them to do so.
Parents of school-aged children couldn't necessarily arrange for someone to take their children to and from their school and, anyway, might not want their children returning to an empty house.
School students could only attend if they were able to take one or two days off school. This might be an attractive option to the students (!), but the absence of any young people at the workshop showed that it wasn't necessarily feasible.

DCSCA officers at the workshop did their best to think about what people in each of those absent groups might want to say about the future of the twon centre and to present those views effectively. However, nothing is as good as people presenting their own views and it's unfortunate that the workshop was arranged in such a way that they were unable to do so.

Lessons learned?
It's never possible to make arrangements that suit everybody, of course. However, DCSCA has criticised the council consistently for its inflexible approach to public consultation and has offered many positive suggestions for improvement, which have been ignored. With a little thought, the organisers of this workshop could have offered local people a variety of ways in which to participate, rather than having to turn up each day. This workshop offered many lessons concerning public participation - it remains to be seen whether the council applies those lessons in the next stage of this particular consultation process - inviting public comment on the draft 'Masterplan'.
Posted by Patrick Hughes at 6:35 PM