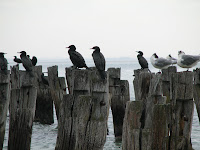 Today, May 13, is the second of three days of Public Hearings by a Planning Panel appointed by State Planning Minister Justin Madden to review proposals by the City of Greater Geelong (CoGG) to rezone parts of Drysdale & Clifton Springs.

(For a report on Day 1, see 'Planning Panel Day 1' on this blog; for the background to the Planning Panel, see other articles on this blog under the titles 'Rezoning Drysdale & Clifton Springs'.)

Today's Hearing started at 10.00 a.m. and, for much of the day, the Panel considered Amendment C194. The first presentation was by Mr. Patrick Hughes on behalf of the Drysdale & Clifton Springs Community Association (DCSCA). The Association neither supports nor opposes the proposals in C194 as such, but it has detailed criticisms of the process by which CoGG invited public comment on them. (See DCSCA's submission on this blog in the article titled, 'Re-zoning Drysdale (3)'.)

The second presentation was by Mr. Ian Cook, who asked the Panel to make two recommendations to CoGG: retain the public open space in the Springs Street area of Clifton Springs, with some low-level recreational facilities; and require property developers to make their developments 'water neutral' by including infrastructure to recycle storm water. Next came Mr. Ian McGuiness, who described the Community Plan being developed by local people for the Springs Street open space, emphasizing that the Plan will be based on local people's views, unlike CoGG's proposals for the area.

In different ways, three presentations by residents of the Drakes Road area of Drysdale - Mr. David Burke, Mr. Ron Vernieux and Mr. Ric Gower & Mrs. Sue Gower - argued that CoGG's proposal to re-zone their properties from Rural Living to Future Urban Consolidation disregards the significant environmental values embedded in their properties and contradicts several recommendations in the Drysdale & Clifton Springs Structure Plan. Ms. Renate Kint emphasized the environmental richness of the Drakes Road area as she asked the Panel to recommend that CoGG re-zones her nearby olive farm from Farming to Low Density Residential. CoGG's Mr. Peter Smith responded to these presentations by saying that that it's possible that CoGG should re-examine the properties in the Drakes Road area before deciding to re-zone them.

Other presentations addressed different proposals in C194. Mr. Gerhart Herzer asked the Panel to recommend that CoGG allow him to subdivide his land in south Drysdale; Mr. Ray Gamble (via Ms. Sarah Wright) supported the proposal to zone his land as Future Urban Consolidation; Mr. Eddie Hoyer asked the Panel to recommend that CoGG withdraws its proposal to extend the Business 4 zone in Murradoc Road further to the east; and Ms. Joanne Preece, of TGM (representing Lascorp Development Group p/l), asked the panel to recommend that CoGG remove the phrase 'small to medium' from its description (in the Structure Plan) of the type of supermarket that could be built on the site of the Drysdale Bowling Club. CoGG has agreed to this proposal.

At 3.30 p.m., the Panel switched its focus to Amendment C103, when it heard Mr. Peter Schembri, of CoGG's Strategic Implementation Unit, present the council's case for the Amendment. If adopted, Amendment C103 would agree to a request by Melbourne-based property company ULD that its land south of Murradoc Road should be re-zoned from Farming to Residential 1, allowing ULD to build a 300-lot housing estate there. CoGG supports ULD's proposal, because it believes that it is consistent with the Structure Plan's recommendation that the land should become a housing estate. Council officers have worked with ULD to prepare the Amendment - specifically, the 'Section 137 Agreement' that sets out how much ULD should contribute to the development's infrastructure and to community facilities.

Tomorrow - the final day of Public Hearings - will start with a short return to C194 as Mr. Gary Laver presents his views about the Amendment. For the rest of the day, the Panel will hear presentations concerning C103 by ULD (which will call several 'expert witnesses'), by Aldi and by the Drysdale & Clifton Springs Community Association.