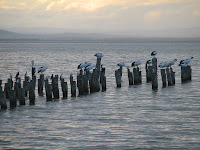 Today, May 12, is the first of three days of Public Hearings by a Planning Panel appointed by State Planning Minister Justin Madden to review proposals by the City of Greater Geelong (CoGG) to rezone parts of Drysdale & Clifton Springs.

(For the background, see other articles on this blog under the titles 'Rezoning Drysdale & Clifton Springs'.)

The Panel consists of two people, each an expert in planning policy: Ms. Gaye Mckenzie (Chair) and Ms. Susan Porter. The Panel had already visited Drysdale & Clifton Springs to see the area that would be affected if the proposed rezonings were adopted; at the end of today's Hearing, they made a second visit, accompanied by some submitters, to see specific features of the area that submitters were concerned about.

Today's Hearing started at 10.45 a.m. and the major event was a two-hour presentation by Mr. Peter Smith, CoGG's Co-ordinator of Strategic Implementation.

(That policy and practice defines 'community consultation' as a series of steps that a local council must take. These steps include advertising a proposal in local papers and in the Government Gazette. They don't include a council talking with local people, listening to their views and then either acting on them or explaining why it can't. In its presentation tomorrow, Drysdale & Clifton Springs Community Association will argue that C194 shouldn't be adopted at present and in its current form, because community consultation about it has been inadequate and inappropriate.)

Mr. Smith's emphasis on precedent and process highlights the 'technical-legal' nature of the Planning Panel process. A Planning Panel is appointed to establish whether proposals for change - irrespective of who makes them - are consistent with planning policy and practice. Ms. Mckenzie, the Chair of this Planning Panel, made it clear at the Panel's 'Directions Hearing' in April that this Panel would review C194 and C103 from the particular perspective of professional town planners.

The 'technical-legal' nature of the Planning Panel process means that presentations before a Panel are meant to convince the Panel that the proposals before it are either consistent or inconsistent with established planning policy and practice. People who appear before a Panel may wish to argue for or against a proposal on its intrinsic merits (e.g., 'This is a good proposal', or 'This is a bad proposal'), but a Panel doesn't judge a proposal on its intrinsic merits - only on its consistency or inconsistency with established planning policy and practice.

However, most people who are appearing before this Panel to talk about C194 aren't concerned with its consistency with established practice. They either support or oppose C194 (in whole or in part) because of its potential effects - good or bad - on their lives and their property. This means that the two sides are arguing at cross-purposes. The proposer of a change (in C194, that's CoGG) argues that it's a change consistent with established planning policy and practice; but submitters want to argue that the change is good or bad for them and aren't interested in policy and practice. Given that a Panel's job is to judge a proposal on its consistency with established planning policy and practice, submitters' 'personal' judgments about a proposal become, in effect, irrelevent! More on this tomorrow.

After lunch (1.00 - 2.00 p.m.), Mr. Charles Fegis, a Planning Consultant based in Geelong, gave a one-hour presentation on behalf of Ms. Kerry Bell and others who live on land south of Huntington Street, Drysdale. At present, their land is designated in the Drysdale & Clifton Springs Structure Plan as 'Future Urban Consiolidation'; and they want C194 to rezone it to 'Low-density residential'. They argued that this would be consistent with CoGG land-use policy elsewhere in Drysdale; that it would be consistent with the low-density occupation of land in their area; and that if the land is rezoned to low-density housing, it would still be a form of 'Future Urban Consolidation', because 'consolidation' doesn't equal high-density housing.

Mr. Smith accepted that these arguments had merit and said that CoGG was certainly willing to consider the proposal. However, Ms. Bell and others have tried several times over the last three years to achieve this re-zoning. Each time, CoGG hasn't refused - it has said that it would consider it in the next stage of planning ... and the next ....

Tomorrow, 13 May, is the second day of Public Hearings about C194. Most of it will consist of presentations by local property owners who are likely to be affected (positively or negatively) by the proposals in C194; and by the Drysdale & Clifton Springs Community Association. At 3.45 p.m., the Panel will switch its attention to Amendment C103, when Mr. Peter Schembri, from CoGG's Strategic Implementation Unit, will present CoGG's case for that Amendment. Further presentations concerning C103 will occur on Friday May 14.