Re your item in the March SpringDale Messenger.  The Drysdale Clifton Springs Curlewis Association (DCSCA) would like to thank you and VicRoads for acknowledging and thanking DCSCA for the effort we put in liaising with VicRoads in the design of the bypass.

As you know DCSCA is very much in favour of, and lobbied for many years for the construction of a bypass in order to “get the trucks out of Drysdale High Street” and to improve the safety and ambience of our community and our motivation was to assist VicRoads in obtaining the best outcome for the Bellarine community.
Your item stresses the importance of community consultation, and as The Member for Bellarine who was responsible for obtaining funding for the bypass; the concerns within the community with the traffic lights that you referred to, must be of concern to you.

DCSCA recommends a simple solution: - That you require: -
VicRoads to make available to the community the data evidence upon which they determined the signalized treatment to be preferable to the roundabout option.
I.E. VicRoads to disprove the data comparison shown below.

If, as VicRoads asserts, the signalized treatment is the correct outcome, this data would set the community’s mind at rest.
As you know, at a meeting in your office on 24th March 2017, VicRoads agreed to provide comparative safety and traffic efficiency data comparing the 2 alternatives.
VicRoads did provide comparative traffic efficiency data: - in the Consolidated Options Report.

This VicRoads document showed the roundabout solution is a massive 10 times more efficient for Drysdale Clifton Springs traffic and a massive 5 times more traffic efficient overall with delays of only 10 seconds or less for all major traffic routes.

VicRoads and the expert witness to the Hearing Panel do not dispute that the roundabout option will be significantly safer “in traffic terms”. There will be a lower risk of crashes resulting in injury for the 30,000 vehicles per day that will pass through the intersection.

Nor does VicRoads dispute that the signalized treatment will entail the removal of a huge number of trees and will dramatically worsen the pleasant ambience of the entrance to Drysdale and of Lake Lorne Reserve.

What VicRoads does assert is that the roundabout option does not provide a safe outcome for pedestrians and cyclists (active transport). VicRoads has not disclosed what active transport crossing treatment (associated with the roundabout option) was assessed in making this judgment.
DCSCA believes that the community expectation would be that traffic infrastructure of this critical importance would be selected on sound evidence and engineering data, not on unsubstantiated opinion and assertions.

The alternative roundabout proposal advocated, is for two 2-lane roundabouts with slip-lanes constructed to Austroads/VicRoads recommendations within a well-designed active transport network with pedestrian/active transport crossings also constructed to Austroads/VicRoads recommendations. More details are shown in the attachment to this letter.
DCSCA has conducted two comparative safety assessments, which both show that the roundabout system with the well-designed active transport system proposed will be safer for pedestrians and cyclists.

Both DCSCA and BCC believe that the evidence available to them shows that the signalized treatment is the wrong outcome and will create an unsafe, inefficient and unattractive traffic bottleneck at the entrance to our community. As a result, there will be more crashes resulting in injury, increased travel times, a massive loss of trees and it will be very poorly received by residents of Drysdale and Clifton Springs.

DCSCA wishes to stress that it is in no way seeking to delay the construction of the bypass. The community expectation would surely be that the information requested would already be in VicRoads possession. Furthermore, should it transpire that the roundabout option is indeed the better solution, DCSCA believes that it will be quicker, easier and cheaper to construct and also much less disruptive during the construction process than the signalized option.

In addition, DCSCA has consistently advocated that the connection from Peninsula Drive through to Belchers Road should be completed prior to the commencement of the construction of the western intersection and that this should be expedited without delay.


This Table illustrates the information requested and also summarises DCSCA’s analysis and the evidence that VicRoads has made available to DCSCA.
Traffic delay times are obtained from the VicRoads Consolidated Options Report.

DCSCA asks again that VicRoads present their data to disprove these concerns.

DCSCA has requested the assistance of the Victorian Ombudsman in the matter.

It should also be noted that the Hearing Committee had significant reservations with the proposed design of the intersection. See Attachment for further information.

Looking forward to your and VicRoads responses in this matter. 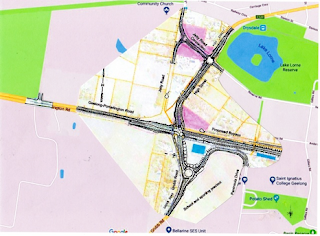 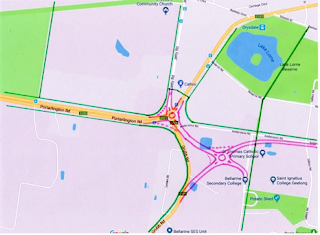 The Active Transport Network is shown in green.
More on Safety.
This analysis is based on the following paper: Jurewicz C, Sobhani A, Development of an analytical method for Safe System assessment on intersection design. 27th ARRB Conference 2016.
The number of conflict points (e.g. vehicle-to-vehicle) can be used to calculate a prediction of the number of injury causing crashes using an estimation of the number of errors per million trips though each conflict point.
For example assuming 1 error per 50 million trips through each conflict point. (This is a number used for comparative purposes obtained from www.fhwa.dot.gov/publications/research/safety/00067/000675pdf which refers to injury crash rates of 0.08 to 0.275 crashes per million vehicles entering an intersection).
The Towards Zero website describes driver error as “inevitable” and crashes are bound to occur. This is due to many factors: e.g. drug usage, alcohol consumption and risk taking behavior in society, driver distraction, use of mobile phone whilst driving, mix of heavy and light vehicles with different braking performance, prevalence of young or inexperienced, sun glare, etc. etc.
Two calculations have been made 1 error/crash every 50million conflicts (quoted in the table) and 1 error/crash every 100million conflicts.
DCSCA believes that errors would be more likely that average at these two signalized intersections due to: - the east/west orientation causing sun glare at peak AM and Peak PM periods, a high mix of trucks and towing vehicles with different braking distances, the probability of a high mix of young/inexperienced drivers and pedestrians.

DCSCA believes the 4 facts below summarise our concerns: -

1. It is undisputed that the alternative roundabout treatment will be much safer for the predicted 30,000 vehicles per day that will pass through the intersection.
There will be more vehicle-to-vehicle crashes that result in injury with the signalized option.

2. It is undisputed that the roundabout treatment will provide much lower travel times for the predicted 30,000 vehicles per day that will pass through the intersection.
VicRoads own analysis predicts that, with the roundabout option, there will be delays of 10 seconds or less for all traffic routes compared with 40 to 80 seconds for the signalized option.

4. The only fact in dispute are that VicRoads asserts that the roundabout treatment does not provide the safer option for pedestrians and cyclists and, unfortunately, this view was supported by the Hearing Panel.
DCSCA requested that VicRoads present evidence to support this assertion but they declined to do so.  They also declined to provide information on what pedestrian treatment was assessed for the roundabout proposal and what predicted pedestrian and cyclist volumes were used in making this statement.

Fact 1: More information.
There is a mountain of evidence that shows that roundabouts are safer in traffic terms than signalized intersections and this was confirmed by expert witness Mr Henry Turnbull of TraffixGroup in his 31st July 2017 letter to the Hearing Panel.

It should also be noted that the Hearing Committee had significant reservations with the proposed design of the intersection.
Executive Summary:
The Panel concludes that a left turn slip lane from Geelong-Portarlington Road onto Jetty Road has merit and should be more closely examined by VicRoads and Council.
VicRoads should review the intersection design for the Bypass/Grubb Road/High Street intersection, taking into consideration an expanded school population, the community/sports precinct and the seasonal variation in traffic volumes.
Page 34. The Panel agrees with DCSCA that the roundabout diameters shown on the functional plans are excessive.

Fact 2: More information
VicRoads own Consolidated Options Report clearly shows the roundabout solution to be far more traffic efficient. With the signalized option (left), traffic from Drysdale and Clifton Springs has to pass through two signalized intersections with C and D level of Service compared to only one roundabout with an A Level of Service.

Fact 3: More Information
This is the site of the new High Street/Jetty Road/Reserve Road intersection.
High Street will be a 2 or 3 lane dual carriageway with pedestrian footpaths either side all the way from here to the intersection with the bypass.

All the trees in the photo on both sides of the road will be removed. 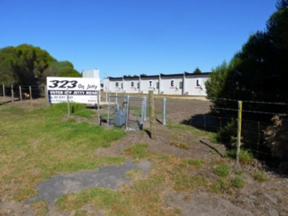 A new entrance will be provided into the motel and its unattractive rear aspect will be exposed. 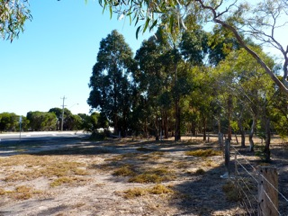 These photos show the fence line of the roadside reserve that will be extended towards Drysdale. All the trees to the left of the extension of the fence line will be removed. 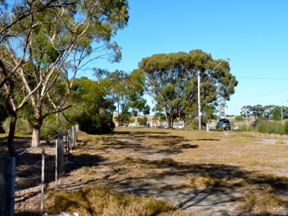 All the trees to the right of the fence will be removed. 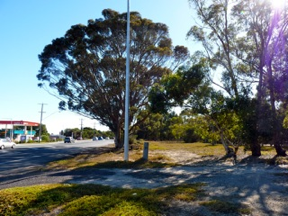 All these trees to the left of the fence will go. 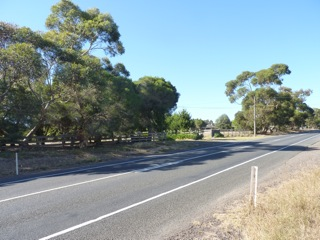 This is the approximate location of where Jetty Road will deviate left to intersect with High Street. All the trees along the route will be removed. 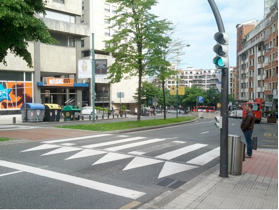 Note. DCSCA is concerned that the roundabout option may have not got a fair assessment by the Hearing Panel. This is a paragraph from the Hearing Panel Report: -
The Panel appreciates the input provided by DCSCA in support of its intersection solution, however, it does not agree with their conclusions. In particular, the Panel does not accept that a roundabout will provide a safer option in this case, nor that there will be operational advantages. The Panel does not support the use of pedestrian underpasses at the intersection. This, in the Panel’s view, is reflective of the shortcomings of the roundabout solution.
This suggests that the Panel may have rejected the roundabout solution largely because they were under the impression that it was dependent on pedestrian underpasses. Such was not the case.

DCSCA has conducted two safety analyses, which both show that these crossings will enable fewer pedestrian-to-vehicle conflicts and will be safer for pedestrians.

DCSCA has consistently presented evidence of these concerns with the signalized treatment and presented evidence that a roundabout treatment with slip lanes within an active transport network would be much safer and more efficient for all users (motorists, pedestrians and cyclists) as well as not destroying the pleasant ambience of the entrance to Drysdale. DCSCA has not seen any evidence to counter these concerns. 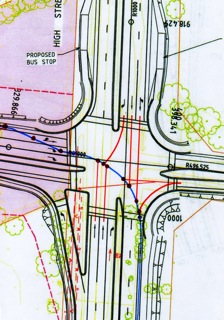 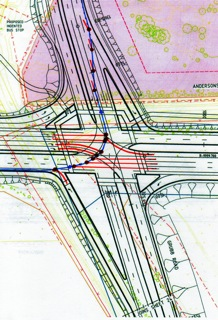 
With the roundabout option cyclists have to pass through one pedestrian conflict point and 10 vehicle conflict points. This is less than half and indicates that the roundabout solution is likely to have fewer cyclist crashes than the VicRoads proposal which has 2 signalized intersections and one roundabout.

Furthermore the roundabout proposal is for two roundabouts within a well-designed Active Transport Network that would be provide routes that would be quicker and safer and encourage cyclists not to travel on the roads: - an indisputable safer outcome.