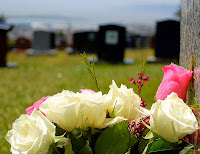 The vacant land in question would accommodate about ten thousand graves - nowhere near enough to meet the area's expected population growth. The Bellarine Peninsula in general is expected to see a major increase in population in the coming years and each of its local cemeteries (including Drysdale's) has only about 20–25 years worth of grave sites available. Consequently, the Trust is looking for land on the Bellarine for a new Bellarine Cemetery.
Posted by Patrick Hughes at 2:48 PM