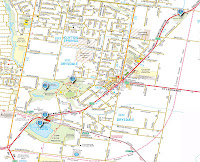 The broad ideas behind the light industrial precinct emerged from a two-day workshop held at SpringDale in December 2011 at which local people discussed various options for redesigning Drysdale's town centre with council officers, architects and planning experts. (See 'A new future for central Drysdale?" [14 December 2011] on this blog.)
Posted by Patrick Hughes at 4:27 PM