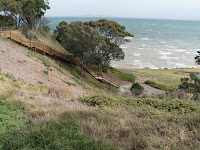 (Photo of The Dell by Linda Gallus)
Posted by Patrick Hughes at 4:19 PM