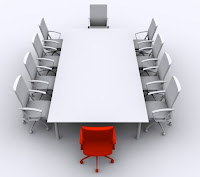 On June 18, representatives from community associations on the Bellarine Peninsula met Stephen Griffin, Chief Executive Officer of the City of Greater Geelong for the first time to discuss Bellarine-wide issues.

The meeting lasted an hour and covered four items.
1. Consultation policy
Stephen Griffin heard of the widespread feeling within communities that the City of Greater Geelong's public consultations appear to have no effect on subsequent policies. He agreed to a further meeting to hear detailed examples and to discuss a new consultation policy for the council that has been presented by ABCA.

2. Infrastructure on the Bellarine
ABCA has produced a comprehensive list of items needing attention and it was suggested that a designated CoGG 'officer for the Bellarine' could assist CoGG to respond to these sorts of Bellarine-wide isues. Stephen Griffin advised ABCA to submit its list and proposals to CoGG's draft Land Use Strategy when it is released for public consultation.

4. Climate change
It was reported that Bellarine Bayside is about to undertake a study on climate change, yet the area it controls is only a small proportion of our total communities. ABCA called for CoGG, Surf Coast Shire and other relevant agencies to be involved in any such study.

The meeting was positive and business-like. It bodes well for future relations between ABCA and CoGG.
Posted by Patrick Hughes at 9:38 AM